Marianopolis traces its heritage back to the first educational endeavours of 17th Century Montreal; to a vision of education that centres on the dignity of the individual, the intrinsic value of each human being and the ability of each person to grow through lifelong learning. For more than a century, Marianopolis has been a haven for academic excellence, a close-knit community where dedicated educators and motivated learners come together within and beyond the classroom in a shared quest for knowledge and understanding.

Here are some of the events that have shaped the College’s rich history.

1854: the congregation purchases property at the foot of Mount Royal from Samuel Cornwallis Monk as a future site for its educational endeavours.

1911: the College confers its first Bachelor of Arts degrees through an affiliation with Université Laval.

1922: the College’s affiliation is transferred to the newly chartered Université de Montréal.

1926: renamed Marguerite Bourgeoys College, the College moves to 4873 Westmount Ave., designed by J.O. Marchand, the most prominent Quebec architect of his time and creator of such architecturally significant buildings as the Municipal Courthouse and the Peace Tower of the Parliament of Canada.

1944: the College relocates to the corner of Guy Street and Dorchester Boulevard, in the building that had housed Mount Saint Mary Convent and, before that, St. Patrick’s Hospital. Its English sector’s curriculum is named Marianopolis and reorganized along the lines of English-language universities to include programs in general science and honours chemistry.

1969: after sweeping changes in post-secondary education in the province, Marianopolis phases out its university programs, introduces CÉGEP-equivalent programs, admits male students and embarks on a unique partnership with McGill University’s Faculty of Music. Today, Marianopolis remains the only college whose Music students participate in McGill choral and instrumental ensembles.

1971: the first male students graduate from Marianopolis; the College grants its first Diploma of Collegial Studies.

2007: Marianopolis returns to the historic building at 4873 Westmount Ave., owned by the congregation. The campus’ facilities are modernized and a double gymnasium is built underground.

2009: the College begins a transition to a lay administration and board with the hiring of the first director general from outside the ranks of the congregation. A first lay academic dean is hired three years later.

2017: the College undertakes the largest renovation project in its history to equip its architecturally significant building with modern safety features, heating, ventilation and air-conditioning, while upgrading teaching, learning and working spaces across campus.

2020: during the COVID-19 global pandemic, Marianopolis shifted to online education and services.

2021: as part of its commitment to meet the recommendations of the Truth and Reconciliation Commission Report, the College is reflecting on its heritage and its relationship with Indigenous communities. Along with the sisters of the Congrégation Notre-Dame, the members of the College community share a “willingness to do our part on this long and important journey towards healing that we must collectively undertake.”

The College’s crest embodies its history in a timeless and elegant manner. The open book symbolizes an institution dedicated to educating students from all backgrounds in Montreal and the world. The monogram AM is the motto, Auspice Maria, Latin for “under the guidance of Mary.” Together with the image of the walled city it signifies Ville-Marie, the city of Mary or Marianopolis. The star and crescent are taken from the seal of the Congrégation de Notre-Dame, the College’s founding order. The wavy band with diamonds is an adaptation of the Archdiocese of Montreal’s coat of arms. 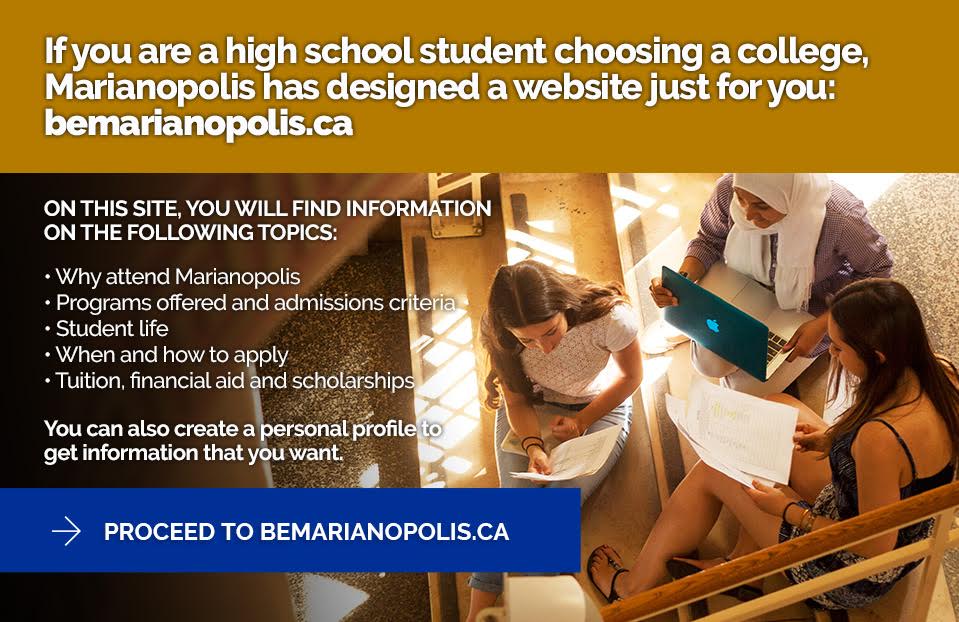